by Marielle Nitoslawska
A portrait of painter, filmmaker, poet and performance artist Carolee Schneemann who challenges assumptions of feminism, gender, sexuality, and identity
2012  ·  1h40m  ·  Canada
English
Share
About the Film
BREAKING THE FRAME is a feature–length documentary portrait of the New York artist Carolee Schneemann by Canadian filmmaker Marielle Nitoslawska. A pioneer of performance and body art as well as avant-garde cinema, Schneemann has been breaking the frames of the art world for five decades, in a variety of mediums, challenging assumptions of feminism, gender, sexuality, and identity. Utilizing a rich variety of film and hi-definition formats, Breaking The Frame can be described as a kinetic, hyper-cinematic intervention, a critical meditation on the relation of art to the physical, domestic and conceptual aspects of daily life and on the attributes of memory. It uses Schneemann’s autobiographical materials to narrate the historic upheaval within Western art in post-war America. The film captures Schneemann in her own words, images and reflections, at work, at home, in the studio, and interweaves extensive film excerpts from her groundbreaking film work in both super 8 and 16mm such as Fuses (1967); Kitch’s Last Meal (1973-76), with documentation of performances including Meat Joy (1964); Interior Scroll (1975) and more recent museum commissions and exhibitions. By highlighting the sheen of photographic prints, the fibres of diary pages and the gloss of wet paint, Breaking The Frame provides a textured mise-en-scene that resonates with Schneemann’s corporeal focus. The visual composition is complemented by a soundtrack featuring the music of composer James Tenney. Tenney was Schneemann’s companion and collaborator for many years, and the two remained close friends until his death in 2006. Ultimately, Breaking The Frame presents the artist’s recollections and meditations on life/work in order to pose the questions what is space, where is form, and how do we look? The insistently roving camera breaks open the frame(work) of art, revealing the magnificent mess of interiority and the interconnected holism of the creative process. By eschewing standard chronologies, Nitoslawska explores the way filmic strategies complicate the traditional understanding of memory as an act of narration and investigates the complexities of the use of visual images as a form of historical testimony.
Upcoming Screenings 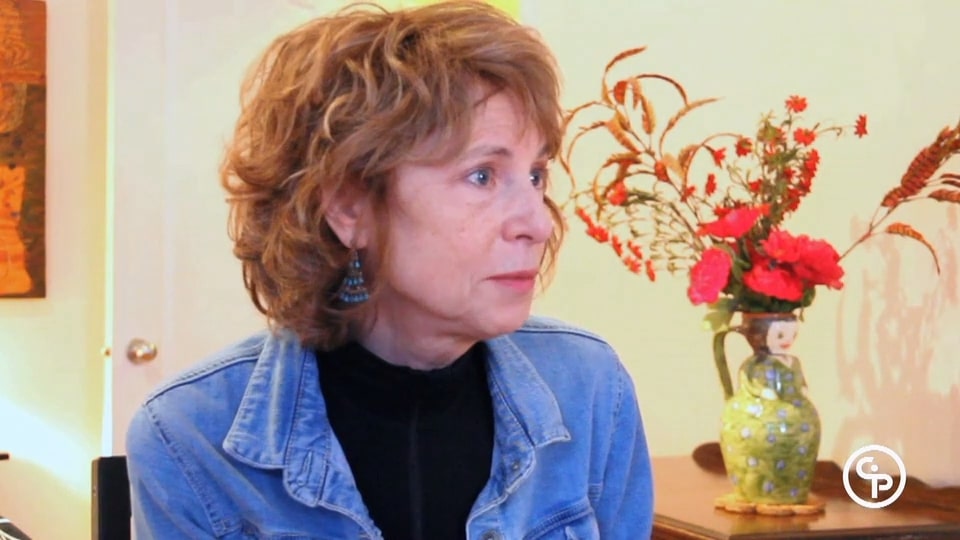 Play Video
Artist Talk with Marielle Nitoslawska
About the Director

Marielle Nitoslawska, born in Canada, is a filmmaker, cinematographer and film professor who lives and works in Montreal. She received her B.F.A. in Studio Arts and Art History from Concordia University, Montreal and an M.F.A., magna cum laude in Cinematography from the Polish National Film School in Lodz. She remained in Poland for a decade, working as a filmmaker during the social and cultural upheavals that led to the fall of that country’s communist government. There, she shot numerous exploratory ethnographic films in 35mm and actively participated in the underground media arts movement in Lodz, with friends and mentors from the Workshop of Film Form.

Nitoslawska has made numerous film essays, both feature length and short form on ground-breaking movements and artists such as Domingo Cisneros, Szczepan Mucha, Jozef Robakowski, and Carolee Schneemann. Poetic and unconventional, her films explore the ideas behind the work of these artists and their contemporary significance. Her films have received critical acclaim and extensive festival play, and include Bad Girl (2002), a groundbreaking documentary investigating explicit representations of female sexuality; Sky Bones (1999, nominated for Best Art Doc, Hot Docs); and Choices: An Artist From Eastern Europe Speaks Out (1987), included in the National Gallery of Canada’s permanent collection. Her work is defined by an experimental approach to structure and explorations into narrative and representation.

She has also collaborated widely as an award-winning cinematographer on documentary, experimental and fiction films for a variety of directors. Her work has exhibited internationally at museums, art institutions, galleries, biennials and film festivals, including the National Gallery of Canada, Musée du Québec, WRO Biennale (Poland), Goethe-Institut New York, Vancouver Film Festival, Hot Docs, INPUT, FIFA, and the Festival du Nouveau Cinéma.
Nitoslawska served as Chair of the Mel Hoppenheim School of Cinema at Concordia University from 2009-2012. In 2006 she received the Faculty of Fine Arts Distinguished Teaching Award. She directs the Possible Movements Lab, a research group in experimental documentary, at Concordia’s Hexagram Institute for Media Arts.

Other films by Marielle Nitoslawska